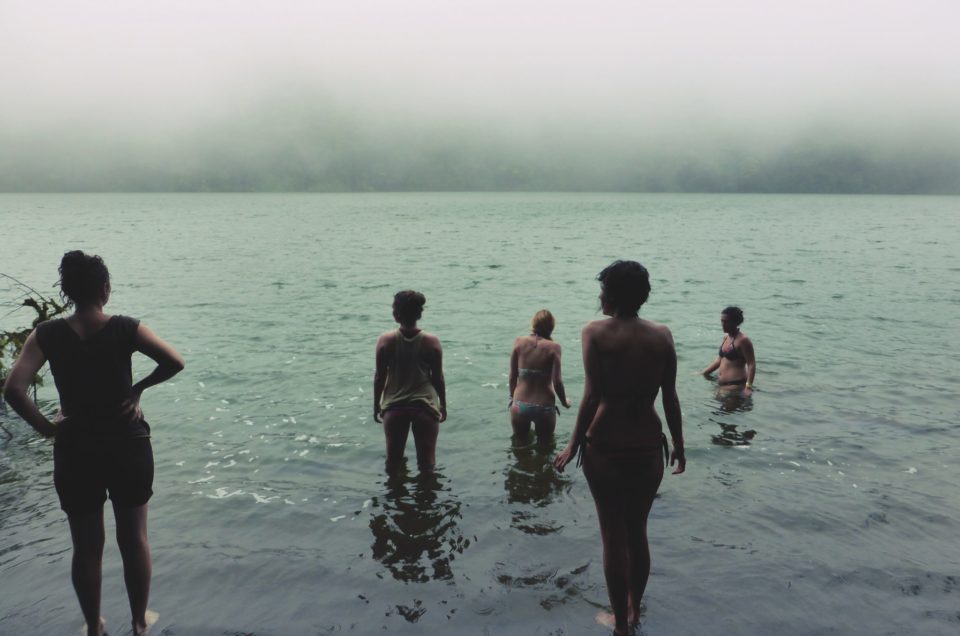 More than 80% of the earth’s surface is volcanic in origin. The sea floor and some mountains were formed
by countless volcanic eruptions.
Gaseous emissions from volcano formed the earth’s atmosphere.
​​SMLXL
Copyright by wikilmages pixaby.com

Climbing up the volcano Cerro Chato in Costa Rica
The climb was actually supposed to be a hike but when we finally stood up on a slippery rock ledge soacking wet of rain and full mood and looked down my friend said:
‚No, I cannot go down there. If I get hurt nobody will ever be able to get me out of here!‘
After five minutes of discussion we jumped down and soon we made it to the volcano lake.
​​SMLXL
​​SMLXL
We were in the little town ‘La Fortuna’ close to the volcano Arenal (1670 metres high) in north western Costa Rica. The volcano is one of the most active ones on earth and grows 1 metre every year because of the Lava coming out of the top. The last serious eruption was in 1968.
We didn’t climb the Arenal because it was very misty when we were there and you cannot really go up there and see something anyways.
So we did the small brother ‘Cerro Chato’ which is 1140 metres high and has a lake in it’s crater.
We were a bit disappointed first when we arrived in La Fortuna because of the bad weather. But the next morning, when the rain passed by and parts of the Volcano Areal were visible through the tight mist, the fact to be so close to an active volcano was pretty overwhelming.
SLXLM​​
We did some Yoga on the terrace and could really feel the closeness to nature and the strong atmosphere, the volcano was creating deep down under the surface, so closely connected to the centre of earth.

‘So that I may perceive whatever holds //

the world together in its inmost folds’

When you get in situations so close to nature, when you are high up on a mountain and suddenly feel how small you actually are it feels scary on the onehand cause all you’ve done so far in life doesn’t count.
All A-Levels, Bachelor degrees, Driving licences, Qualifications, Grades all this, doesn’t count. You get to see how unimportant you actually are for nature and for the existence of earth. And you get to understand, the only person you have to satisfy is yourself.
Because you came alone and you will go alone without being lonely, hopefully. But yet alone.
​​SMXLL
copyright wikilmages pixaby.com Casper David Friedrich, Wanderer über dem Nebelmeer

This awareness makes you so free.
So free from exceptions, from material thoughts and from evaluations.
Everytime I feel bad I try to see the earth from out of space, from very very far away.
Try to see my behaviour and my current values and things I care about from a very wide perspective, from a perspective where given structures, trends and rules don’t count.
I never had this feeling so strong as when I sat down on a fallen down tree trunk which reached all the way to the centre of the volcano lake. I felt secured in this crater.
Underneath me hundrets of metres of water.
​​SMLXL
​​SMLXL
​​SMLXL
We climbed down the muddy path and it rained, and the path became a river and we didn’t mind about the fact that we were completely soaked in mud.
We jumped down little cliffs into puddles like school kids on our way back to the village.
​​SMLXL
We were loaded with joy and positivity and so we found two nice woman who brought us to our hostel with their car and later we took a bath in hot springs, heated up by the warmth of the volcano.
​​SMLXL
Copyright windpro pixaby.com
We did a facial mask with volcano mud and our skin felt so good afterwards. When we sat there in the hot water, with our masks and candles all over the place I thought, I wanna be right here now and nowhere else.
Volcanoes are amazing!