I smelled a Whale in Cape Cod 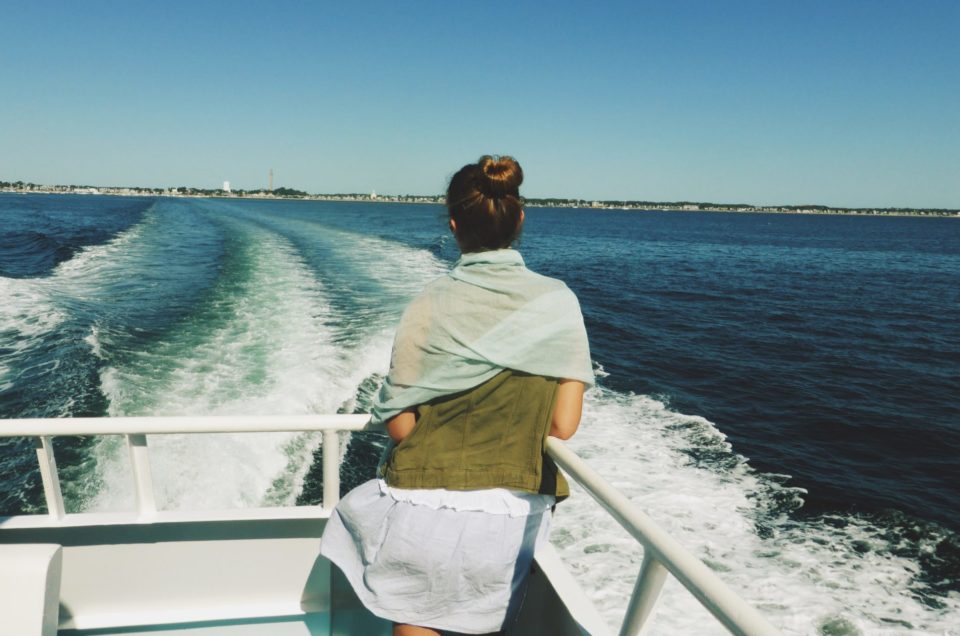 When I was little I would always watch Ocean Girl. An Australian Series where a girl from out of space lives on a remote island and her best friend is a whale.

We would walk along the living room in big steps trying to figure out how long whales may be.
​​SMLXL
These gigantic, prehistoric animals have always been very magical and unreal for me.
Until one day. In Cape Cod Massachussetts, a four hour drive away from New York City.
​​SMLXL
We saw Humpack and Blue Whales. Up to 50 foot long and 40 tons heavy.
But the most amazing thing I experienced was not only the size of the animals.
It was something I would have never expected:
I stood on the lower deck of the boat that took us around, maybe a meter above the water surface and was busy filming some whales a bit further away, when suddenly everyone started screaming and I just saw a black shaddow underneath my feet.
I was so busy searching for a good camera view that I didn’t really watched and just saw, that a huge animal swam right under me just a meter away and blew out some air which smelled of old fish.
I smelled the whale.
After this encounter I put my camera away and told myself to just enjoy the moment.
​​SMLXL

1. The so called blowholes are actually the nostril of the whale and the fontaine of water and air is called spout. They don’t blow out water, it just looks like they would because the air brings some water up as well.
2. Whale experts can distinguish the different types of whales through their different spouts.
3. Everytime you could see the fluke it meant the whale would dive deeper and longer.
4. Humpback Whales typically migrate around 16,000 mi (25.000 km) each year.
5. We saw some whales during their Lunchtime. The Humpback eats mainly krill and small fishes and also uses the bubble net method for feeding.
6. Ethical concerns about whale watching: During our tour I realised that the boats were very close to the animals and if someone spotted a whale up to four boats gathered around the whale which would soon disappear. The tour operator claims on his website to be commited in ethical whale watching but in my opinion whale watching can never be ethical since the boats interrupt the natural behaviour of the animals. Find more information here.
​​SMLXL
​​SMLXL
​​SMLXL
​​SMLXL
Picture by Jenny Oettel

Cape Cod in Massachussetts on the north-east coast of the USA, is a peninsula. The first english migrants settled down in this area in the early 17th century. We visited places like Provincetown, Plymouth, Sandwich (haha I know…), the Yale University and some others where we just stopped because it looked so beautiful like here:
​​SMLXL
​​SMLXL

We did the Whale Watching tour with Dolphin Fleet Whale Watch in Provincetown($40).

Hyannis Hi Hostel – the best hostel I ever stayed in. The hostel is situated in the south of the peninsula. The host was super nice, the house was clean and so comfortable I felt like in a guest family. The breakfast was self made granola and good (!!!) coffee. Just amazing!
​​SMLXL

Provincetown is situated on the top of Cape Cod and has only about 4000 inhabitans. During the week-end it is a popular place for tourists and known for its art and LGBT scene which makes the little town full of life. Wander along the commercial street or just relax on the beach. For more information check out the official website of Provincetown.
​​SMLXL
Mac Millan Pier
​​SMLXL
Hidden Bookstore
​​SMLXL
​​SMLXL
Coffeeshop on Commercial Street
​​SMLXL

A salty lot of love.C.